Last week we passed the 100 hours milestone for visual observations in the Swan River! 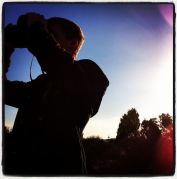 “The early vollie catches the dolphin”

During this first stage we have conducted 37 shifts spread across our Kings Park and Fremantle Port field sites. We spotted 16 dolphin pods, several of which had calves, with sightings lasting anywhere from a few surfacings to a few hours!

Interestingly, we have spotted Gizmo quite a few times, a dolphin who suffered a severe entanglement as a calf back in 2012. Fishing line caught around his dorsal fin cut through a lot of the tissue, leaving his fin rather floppy – and easily identifiable from a distance! Hoping we can start identifying other individuals soon in stage two!

So in summary, it’s been pretty busy!  Thankfully The Dolphineers have been there to share the load! These lovely vollies have put in a lot of time and effort in support of this project, including quite s few early mornings and long, hot afternoons! So to celebrate this milestone, last week we had our first volunteer BBQ down on the river shore.

And, of course, for such an event there must be prizes! Drumroll please, for:

Most Shifts – Lucy Rudd, for conducting almost a third of all the shifts!

Busiest Day – Charlotte Patrick and Bec Oliver, for dealing with the craziest shift which had over 150 vessels in the space of 3hrs PLUS dolphins!

Most Boring Day – Robin Hare, for not only having the least busiest day, but the highest consecutive number of these with no dolphins and hardly any vessels!

As we move towards April, the mornings are getting colder and the days shorter.  But we are still getting in a few new faces amonst the Dolphineers, which should liven up the shifts with some new life stories!  Now I just have to start planning prizes for the next milestone…