For the last few weeks I have been working on the first chapter of my PhD describing the underwater soundscape of the Swan River.  Overall, this has been a really good way of becoming more familiar with identifying underwater sounds.  By far the most baffling of which have come from fish. 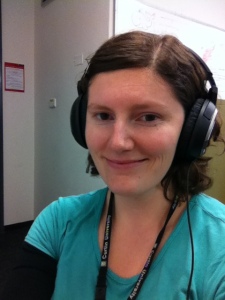 All about that bass: Hard-core headphones are becoming my default fashion accessory at the moment…

It turns out that many fish species produce a whole variety of ridiculous sounds, including quacks, knocks, grunts, sirens, trumpets and even Rolf Harris impersonations (sounds like his infamous wobble-board).  These sounds are all produced in different ways:  some are made using sonic muscles located on or near the swim bladder; others sounds are the result of the fish rubbing together or striking its skeletal components; and sometimes even changes in swim speed or direction can result in noise production.

But, like many animal sounds, the purpose of many fish noises is still to be determined.  Sound production might be intentional, in the form of vocalisations or calls, in which case noises are most likely signals to other animals (e.g. to attract mates, warn off competitors, co-ordinate with conspecifics, or raise the alarm about predators).  However, sounds can also be produced unintentionally as the result of feeding or swimming.  And when your subjects are mostly occurring in the cold, dark oceanic depths it can be pretty tricky to figure out the behavioural context of recorded sounds!

The majority of sounds produced by fishes are of low frequency, typically less than 1000 Hz.  By themselves they can be pretty hard to pull out of a large dataset, thus requiring a systematic search through potentially months of data.  But a really cool characteristic of some fishes is that they call in choruses.  This is when multiple (dozens or even hundreds) of individual fish within the same area produce the same call.

These choruses occur all over the Australian continental shelf, in both tropical and temperate waters and were first discovered in the late 1960s.  Many show significant seasonal trends in chorus levels and differences between years, potentially indicating that chorus activity reflects secondary productivity (see “Continental shelf fish choruses in Australian Waters” by Robert McCauley and Douglas Cato).  Others are reliably produced at specific times of year, and are believed to be associated with reproduction (see “Fish choruses from the Kimberley, seasonal and lunar links as determined by long term sea noise monitoring” by Robert McCauley), although the nature and intensity of some reproductive choruses can change in association with physical and environmental cues (see “An investigation into active and passive acoustic techniques to study aggregating fish species” by Miles Parsons).  Thus, these calls can play significant roles in the life function of many species.

Great to know that, in all these long hours you spend sitting at the computer, you are probably listening to fish sex!