I am a little bit behind in posting about my various PhD publications.  But a pretty cool one that came out in the August edition of Acoustics Australia focused on comparing the acoustic characteristics of urban versus pristine coastal dolphin habitats.

I’ve previously spoken about the need to define the soundscape of dolphin habitats and examine patterns of when and where noise occurs.  But whilst we can monitor dolphin acoustic habitats and describe how they are now, in many cases it is hard to say how they were in the past.  We simply don’t have enough long-term datasets that capture the expansion of human activities into the marine environments – i.e. datasets that go far enough back in time to capture when the habitat was pristine and free of human influence.  Understandably, this can also make it hard to decide how we best manage man-made noise in these habitats into the future.  It’s hard to determine what noise mitigation measures are necessary when you don’t know how quiet an area is ‘supposed’ to be.

A potential solution to this conundrum for managing ‘urban’ areas is to find comparable ‘pristine’ areas which are also used by the study species, and see what differences exist.  Of course, this is reliant upon pristine areas still existing in the first place.  However, in Western Australia we are fortunate enough to have some areas up in the remote north of the state. 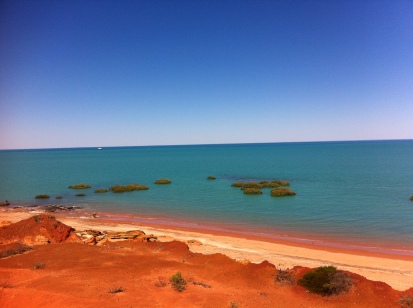 The Kimberley region of NW Australia 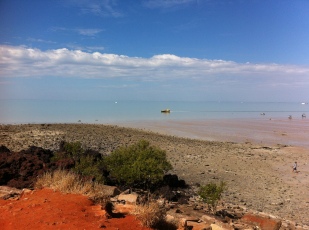 The Kimberley region in north-western Australia is one of the most remote, pristine wildernesses in the world.  The largest town in the region is Broome, which has a permanent population of only 16,000 people (although the temporary population can increase to 45,000 in the tourism season).  Broome is located on the shores of Roebuck Bay, with a relatively large population of snubfin dolphins and is also regularly used by bottlenose dolphins and humpback dolphins.  This area offers a nice contrast with the busy, urban environment of the Swan River, which flows through the Western Australian state capital of Perth.  This river is also used by bottlenose dolphins.  To create successful noise mitigation strategies for coastal dolphins, there is a need to compare ‘quiet’ and ‘noisy’ acoustic habitats.  Roebuck Bay and the Swan River offer the perfect opportunity to do just this. 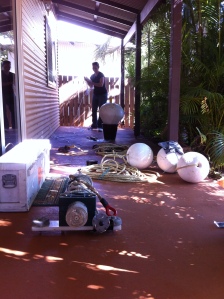 I chose to compare the pristine soundscape of Roebuck Bay with the Swan River’s anthropogenically-noisiest site, the Fremantle Inner Harbour.  I used autonomous underwater acoustic recorders to monitor the soundscape at these sites, and assessed these using a combination of weekly spectrograms, power spectrum density percentile plots and probability densities, octave-band levels, broadband noise levels, and generalised estimating equations – i.e. a shedload of nifty acoustic analyses.

What these essentially showed were that these two sites are very different in their acoustic characteristics.  In Roebuck Bay, biological sounds (such as crustaceans and fish) were the most prevalent sound sources, with very few instances of vessel noise.  However, in the Fremantle Inner Harbour, man-made noise dominated.  This worked out to a 20 dB difference between sites on average, and the frequencies used by dolphins for communication were more likely to be masked in Fremantle Inner Harbour based on elevated noise levels.

In this study, I was also lucky enough to get some acoustic recordings of sounds produced by snubfin and bottlenose dolphins in Roebuck, and could use these for a comparison with the sounds produced by bottlenose dolphins in Fremantle.  This helped me to discuss the potential consequences on Roebuck Bay dolphins if noise levels were to increase at that site.  Such information is going to be useful going into the future, as several coastal developments are currently planned for Roebuck Bay.

To find out more, check the paper out online or contact me!